Skip to content
Monthly Report: a recap of activities in February 2019
Conference / Meet-up

Monthly Report: a recap of activities in February 2019

A busy February saw us bring on a host of new XPOS merchants, new features for the XPhone and intended compliance updates to adhere to the everchanging regulatory landscape ahead of the launch of the Function X. 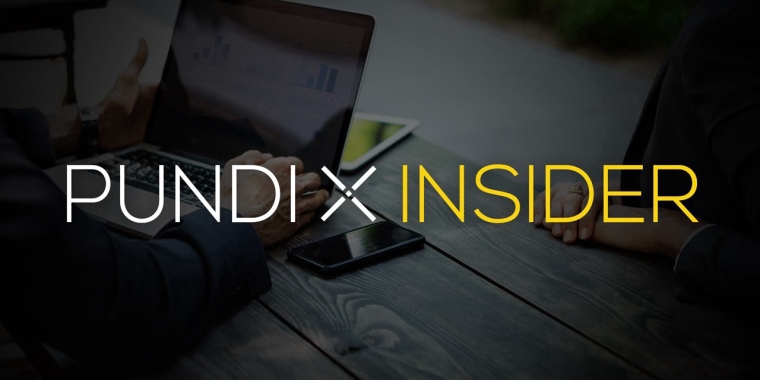 A busy February saw us bring on a host of new XPOS merchants, new features for the XPhone and intended compliance updates to adhere to the ever-changing regulatory landscape ahead of the launch of the Function X.

To stay in touch with all the Pundi X news, please follow our official blog. Otherwise read on for a summary of what we’ve been up to!

New merchants across the world

The global rollout of the XPOS continues apace and we like to highlight some of our favorite new merchants in the Pundi X ecosystem from our official Twitter page.

Here’s our newest additions for February:

DZ9 Hostel has activated the first XPOS in Rio de Janeiro, Brazil. The hostel not only offers an affordable, comfortable lodging option but also becomes one of the pioneers that can accept and top up Bitcoin, Etherum, BNB and NPXS through the XPOS device for their guests. 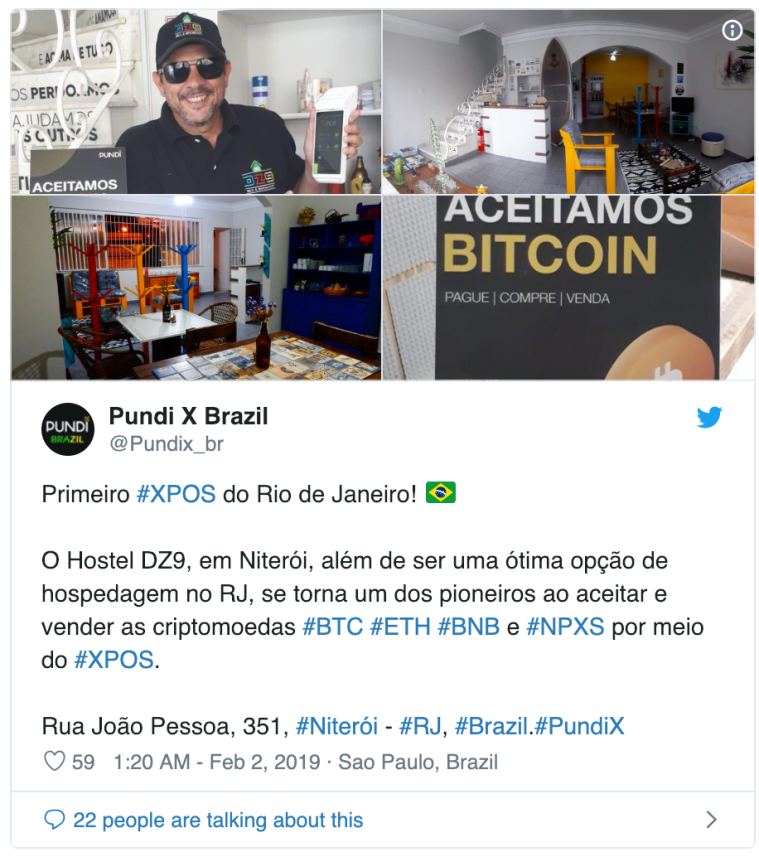 The Tattoos Studio Wayne Tattoo & Piercing has accepted Bitcoin since 2013. The owner is impressed by the speed of transaction made by XPOS and decide to use it for handling crypto transactions. 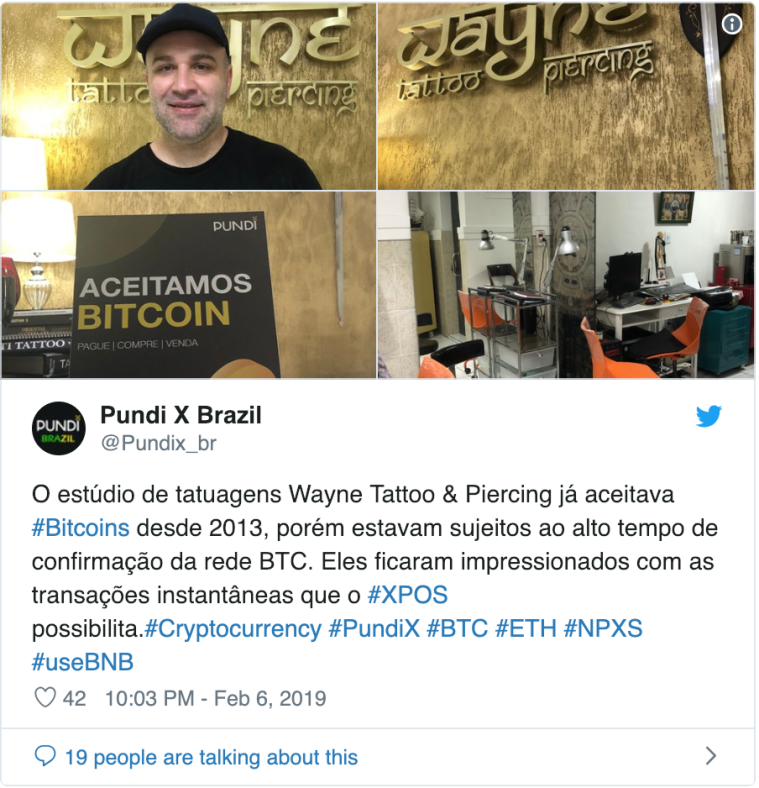 Another XPOS has been spotted in the Netherlands this month. The Muldly’s barbershop is a modern barber’s shop with a mix of vintage design. You can even enjoy some beers while taking cutting your hair. 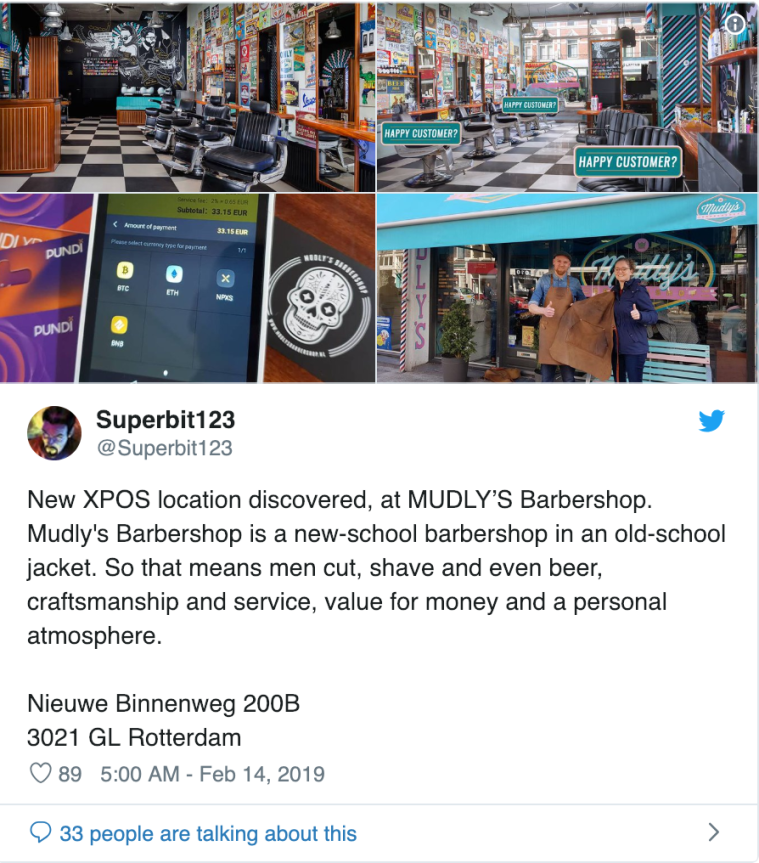 Villa Retiro, located in a five star hotel in Tarragona, is the first Michelin restaurant in the world accepting cryptos. Fran López, the award winning young chef, is the fourth generation of hoteliers and restaurateurs. Together with his creative cuisines, he has offered an innovative payment option to his customers. The use of XPOS to pay for fine dining meals has been covered by TV3, the largest national TV in Catalonia. 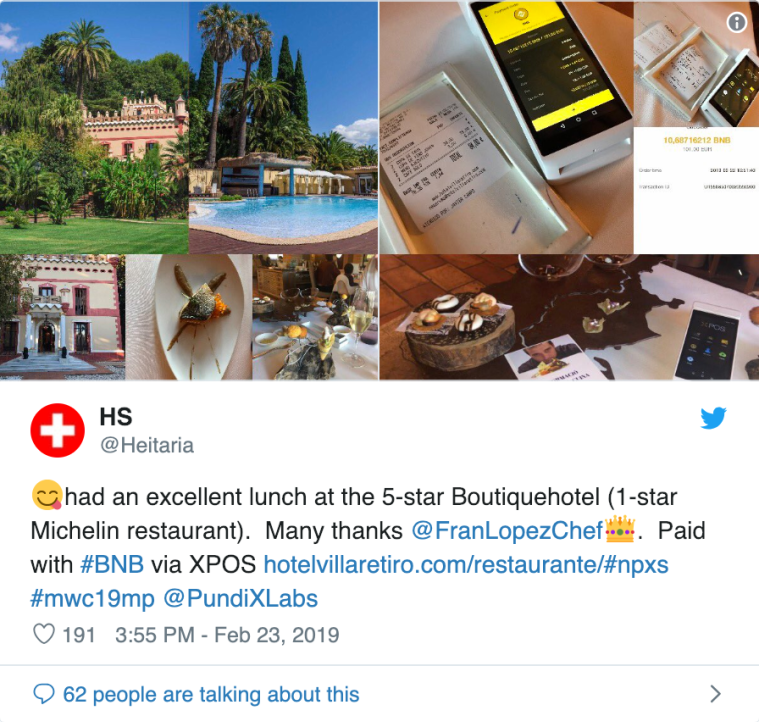 BlockPay, one of XPOS distributors in Australia, has hosted its first XPOS presentation in ANZ BANK Tower, Sydney. The company reports to the Australia’s financial intelligence agency, which means XPOS will adhere to the Anti-Money Laundering and Counter-Terrorism Financing Act 2006 (AML/CTF Act). A new rollout version of the XPhone was showcased at MWC19 Barcelona. It includes an “X” button that allows users to switch to the DApps on the blockchain mode easily with just a press of the button.

Equally exciting and important was the reveal of the XPhone specifications and retail price! The device will boast of a 5.65” inch screen, fingerprint sensor, 6GB of RAM and 128GB of ROM, the Qualcomm® SnapdragonTM 660 Mobile Platform. XPhone will have a 16 megapixel front camera and 48 megapixel rear camera. The battery capacity is 3500 mAH. The retail price will be set at US$599.

More than 100,000 participants converged upon Barcelona in late February for the world’s biggest mobile technology fair.

Pundi X, Function X and the XPhone were, of course, front and center.

Our CEO, Zac, kicked off the event with an address on how blockchain technology was shaping the future at the prestigious MWC Ministerial Programme. And demonstrations of the XPOS and XPhone were made to Mustafa Jabbar, Minister of Post, Telecommunication and Information Technology of Bangladesh. The rest of the week saw us presenting in a meetup hosted by BitBCN and Hola Blockchain with Brave Browser for over 100 Spanish blockchain enthusiasts and exhibiting as one of the most popular booths in the MWC conference hall to spread the word about the new capabilities for Function X. Pundi X rolls on in Dubai

Dubai, a tech hub for not only the middle east region but the globe, has been one of the places which the XPOS has been most warmly received.

So we were pleased to attend the largest experiential tech festival in the Middle East, STEP, at Dubai Internet City in mid-February.

Over 6,000 attendees from tech startups, investors, entrepreneurs and influential speakers saw Constantin Papadimitriou, President, and Kester Wong, Product Analyst, discuss broader trends in decentralized vs state-backed digital currencies and how the region was leading a push toward mass adoption for a tokenized economy.

Starting from February 28, NPXS is available for trading on Bithumb, one of the largest crypto exchange in Korea. Bithumb provides the Korean Won (KRW) trading pair for NPXS. Bithumb has also announced its support of NPXS monthly unlocked token distribution. As we told subscribers early in February, we’re implementing with immediate effect changes to the token unlock scheme for the Pundi X project.

Where previously a three-year roadmap for token unlocks was envisioned, we’ll now be executing those that remain over an expedited period from April 1 to the end of June this year.

The decision has been taken by our legal team for reasons of compliance and does not affect the total value of unlocked tokens. June 2019 will be the final month for the distribution of token unlocks. You can read more about the finer points on acceleration, including distribution dates, in our initial announcement.

Last year was many things for the rise of blockchain. But this year is all about compliance within the fast-evolving international landscape for regulation of blockchain businesses, says our Chief Legal Officer, David Ben Kay.

What does that mean for Pundi X? Three big themes have emerged.

And that’s a wrap for month two of 2019. As ever stay tuned to all our official channels for regular updates on the business. Until next month!