Skip to content
Monthly Report: a recap of activities in November
Team

Monthly Report: a recap of activities in November

One more month to go for 2018! As we turn the corner on a highly-successful year we’ve spent the month announcing new business lines, new uses for our Function X blockchain and even a new global headquarters.

One more month to go for 2018! As we turn the corner on a highly-successful year we’ve spent the month announcing new business lines, new uses for our Function X blockchain and even a new global headquarters.

Read on for details.

In November we finally announced a new spot for our global headquarters: Singapore!

As Zac explained, it’s a step that’s partly being taken by the warm reception our products are meeting here but also partly reflects the climate and opportunities for business:

“We’ve been encouraged by the dynamism of the Singapore blockchain market. The country’s connectedness to the Asian region, talent pool and the early recognition of the economic potential of the blockchain industry have cemented our decision.” Most of our key executive staff, including our new CIO, Vic Tham, is now based at our new main office. They will oversee work from the Jakarta, London, Sao Paulo, Seoul and Tokyo outposts.

QEX: A new fund to grow the Function X ecosystem

Speaking of Vic, he’s at the centre of some exciting plans we just unveiled for a new fund devoted to growing the Pundi X ecosystem.

QEX is a hybrid fund being jointly delivered by us and Quantum Energy Asset Management (QEAM) targeting a $100-million (USD) fund size announced last week and planning to launch next January.

It will be led by Vic, as the CEO of QEAM, and Fen Chao Yong who is COO. Between them they have some four decades’ experience in investment, banking and securities. Vic, you will remember, was most recently COO, Asia Pacific, for Global Transaction Services at Bank of America Merrill Lynch; Fen Chao led a market making and derivatives business for UOB Singapore.

Aside from its primary goal of delivering returns for accredited investors, the fund will also seek to bolster the Function X ecosystem with investments in projects that can build upon its capabilities for decentralized internet and communication.

“We see an immense opportunity for private equity investments in cutting edge technological developments, particularly in Asia and in industries such as fintech and blockchain,” Vic said. “What makes us unique is the power of two — the combination of deep tech and finance investment approach. QEX will be built on that intersection”.

The fund will leverage Pundi X’s deep connections in the world of blockchain and fintech and focus primarily on venture capital and private equity stakes in growth technology companies.

Speaking at Consensus:Invest 2018 in Manhattan this month, Zac revealed the latest application for our Function X blockchain. In October, of course, we revealed how Function X’s capabilities extend to telephony and messaging when we debuted the XPhone.

Our aims for the chain have always been broader and towards using it to create a new blockchain-based internet which can give rise to truly decentralized applications which do not rely on a central authority.

That is just what Zac did when he hailed a cab from midtown-Manhattan to Central Park via a smart contract executed on a new DApp published on Function X and used on his XPhone.

The use of Dapps on Function X will return control to the providers of services and creators of content in a way centralized networks do not.

“We all know that internet companies are deriving tremendous value from controlling data,” Zac said. “But decentralizing apps can put this data onto smart contract and give control back to creators and to users.”

This month we were listed on a number of new exchanges this month including:

We were pleased to have been put under the microscope this month by Binance Research, the new division of the world’s largest cryptocurrency exchange devoted to providing institutional-grade research on blockchain companies. The report is full of analysis on the progress of our project and rigorous detail about our investment. Also included is a rundown of some of our latest merchants in the Netherlands, Singapore and Taiwan:

You can read the whole report here.

In one of our most interesting new developments for the XPOS deployment, Pundi X this month signed a partnership to bring thousands of our devices to the forefront of global agriculture.

The Pundi X-HARA Token partnership is designed to leverage the power of data collection to boost productivity and profits for people employed in agriculture in developing economies.

Under the model, farmers, NGOs, and other on-the-ground partners are incentivized to provide data on ecological, crop, and market conditions with HARA Tokens.

These transactions are conducted in local kiosks via the Pundi XPOS.

Data in turn can be used by governments, insurers and commercial agricultural interests to allocate resources more effectively. This has a direct impact on poverty reduction, with the World Bank estimating that every 1% increase in agricultural productivity brings about a 1% reduction in poverty in the developing world.

Under the partnership, XPOS will be deployed at a density of one device for approximately every 200 farmers.

HARA currently has 10,000 farming partners in Indonesia with plans to rollout in seven other priority markets in Southeast Asia, Latin America and East Africa with an eventual target market of 2-million users.

“A founding aim of Pundi X was to bring the benefits of blockchain technology and digital payments to the unbanked and to promote financial inclusion and independence,” said Constantin, Pundi X’s President and co-founder. “We are proud that the Pundi X POS will soon be rolled out among HARA’s already-impressive network of farming partners”.

Pundi X was in New York, Tokyo, Taipei and more this November in one of our busiest months on the road.

Pundi X was featured as one of five exemplars of world-changing technology at this year’s Amazing Night festival, hosted by Business Weekly and which drew a crowd of more than 20,000 to Taipei. Not only did we present alongside world leading companies such as BMW but all the technology experience zones in the event was run on the Pundi XPOS.

2,000 attendees were provided with an XPASS card loaded with NPXS and specially-created Business Weekly coins (BW Coin) which allowed them to experience the innovations showcased in each of the five transformative exhibitors selected by Business Weekly, which was a great opportunity to show off our latest application: a central dashboard of transactions updated in real-time, something we think will have particular use for public sector clients. Singapore Blockchain Week and the SFF was a busy time for the entire Pundi X team. Vic addressed the conference about the details of our new QEX fund. Meanwhile a selection of our favorite merchants in Singapore participated in a 20% off promotion for customers paying for their meals with the XPOS. We also spoke about blockchain for sustainable development in a panel and held a meetup with our friends at Trust Wallet.

You can check out the wrap-up video here.

He spoke about the progress of XPOS deployment at the local blockchain hub, a centre for blockchain learning, testing, policy research and venture creation, as well as install XPOS devices at the Bradfield Centre.

Zac rubbed shoulders with leaders in government and industry at Lithuania’s largest Fintech conference early in the month. The conference was organized by the Ministry of Finance; the Bank of Lithuania; the Agency for Science, Innovation and Technology; and Invest Lithuania. Pundi X was joined by speakers from the European Bank for Reconstruction and Development, Interbank Card Center, People’s Bank of China, Deloitte, IBM, Nasdaq, VISA and more.

Our company President, Kiki, spoke alongside the Indonesian Blockchain Association on November 14 at a forum organized by the Indonesian Services Dialogue Council. 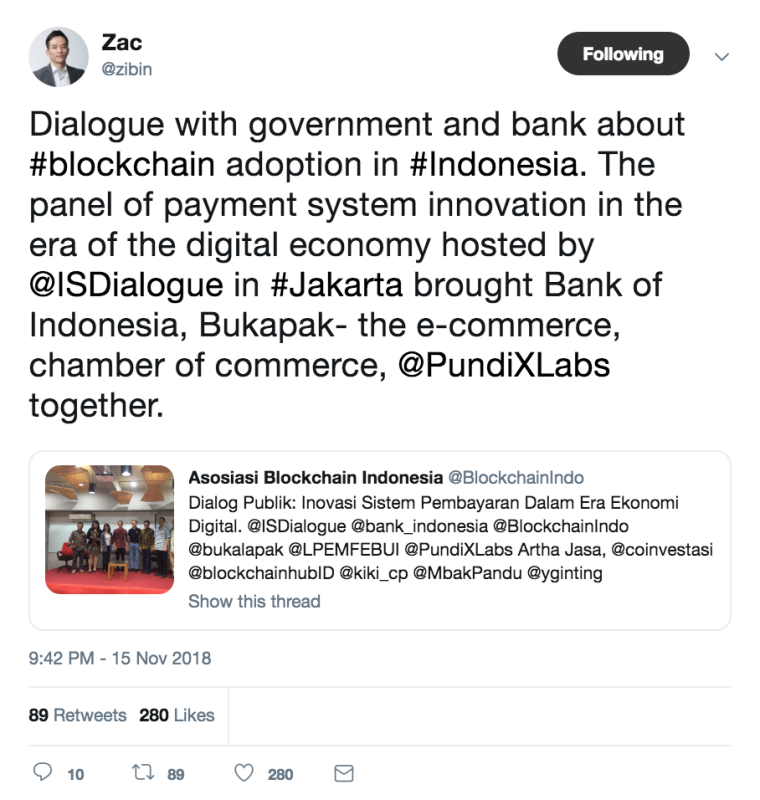 Ryan Cho, our country manager in Korea hosted two meetups for those who are interested in becoming XPOS merchants this month. Ryan gave detailed information about how to use the XPOS, XPASS card and XWallet to facilitate in-store cryptocurrency transactions.

The country manager of our South American operations, Joao, will speak at “Fintopics”, organized by the Brazilian Association of Fintechs, on November 13.

Joao discussed the practicalities of working for an international startup and speak to the topic: “The importance of structuring operations to focus on expansion to new markets from the beginning”

Together with Liquid by Quoine, HaraToken, Wanchain, SwipeCrypto, and Ethereum Indonesia, Indra, the blockchain evangelist, join the discussion of market outlook in 2019 and present the latest updates on our project on November 2.

We were also on hand for a Bithub workshop dedicated to introducing women to cryptocurrency.

In this meetup, we helped set attendees up with their first XPASS card and crypto wallet.

That’s all for this month. Please, stay up to date with all our news on our official page and watch out for out final report for 2018 in a month’s time!

Posted on December 3, 2018 By PundiXLabs Team Posted in Team