Skip to content
Monthly Report: a recap of activities in January 2019
Conference / Meet-up

Monthly Report: a recap of activities in January 2019

It’s a new year, both on the calendar and for the Pundi X project. Close to one year since the completion of our public token sale Pundi X has turned a new corner and we’ve marked the anniversary with new XPOS locations, new development for Function X and new plans to extend the project and, of course, continuing to spread the word about blockchain and mass adoption.

It’s a new year, both on the calendar and for the Pundi X project.

Close to one year since the completion of our public token sale Pundi X has turned a new corner and we’ve marked the anniversary with new XPOS locations, new development for Function X and new plans to extend the project and, of course, continuing to spread the word about blockchain and mass adoption.

Here’s what we’ve been up to in January.

We’ve had a flurry of new merchants come online for the start of 2019. The newest additions to the Pundi X ecosystem mean you can use your XWallet or XPASS to buy a newspaper, paint, personal training, new clothes, postage, a kickboxing class and so much more. More than 70 XPOS merchants have been activated in January 2019.

Here’s a selection of our favorite new merchants this month.

One of the Colombia’s major apparel chains will have XPOS in its stores. Manticora Capital, our distributor in Colombia, has started activating XPOS in 19 Fruta Fresca outlets and XPOS merchant training is in progress.

We’re very pleased to have them on-board as our first merchant partner in Norway and to have completed the first XPOS transaction in the country .

Brazil kicked off XPOS activation this month, including 12 newspaper stands in São Paulo, 10 in Rio de Janeiro and 4 in Porto Alegre.

One of Argentina’s logistics providers for online retail, Aerobox services the entire country with inbound retail shipments from anywhere in the world. And now customers can pay for freight in NPXS, BNB, BTC and ETH every time they shop.

It was only a couple of weeks ago that we announced the beginning of the XPOS’ entry to the American market, also in Chicago. This week we’ve doubled down with the addition of southern cuisine to the XPOS ecosystem.

Since last August, thousands of XPOS have been shipped to more than 25 countries. Over 50,000 XPASS cards have been activated and more than 60,000 transactions were processed by Pundi XPOS devices and the XWallet in less than the first six months of deployment.

Until next month stay tuned to our official Twitter page for live updates as we bring more and more merchants onboard from around-the-world.

XWallet is available on Apple App Store and Google Play

After we officially launched the XWallet app in December 2018, we have finally received approval to launch XWallet on the Apple App Store! Since this is our first time on the iOS platform, we can see there are a lot of improvements yet to make the experience of our iOS users as good as on the Android platform. We will keep working to improve the user experience, better compliance, security and increase the app’s availability across countries.

In January, we launched two major features to increase the functionality of XWallet.

Another new feature is the XWallet reward system for active users and promoters. We believe the feature will generate the greatest interest among our users and provide incentives to increase usage of the app. The more tasks the users complete in the app, the more tokens they will be rewarded with.

We regularly perform security inspections and fixes to make sure funds are safe in XWallet. To check the fund status or any issue, users can also contact us via various channels, including round-the-clock assistance on Telegram, Twitter, Facebook, and email.

In the next version, XWallet will add double authentication (2FA) and stronger KYC in upcoming version.

Not long after the new year was rung in, the Pundi X team was back to work gathering in Las Vegas for the Consumer Electronics Show. The world’s biggest tech show brings in about 200,000 people to Las Vegas, Nevada to showcase the latest developments in consumer technology from around-the-world. 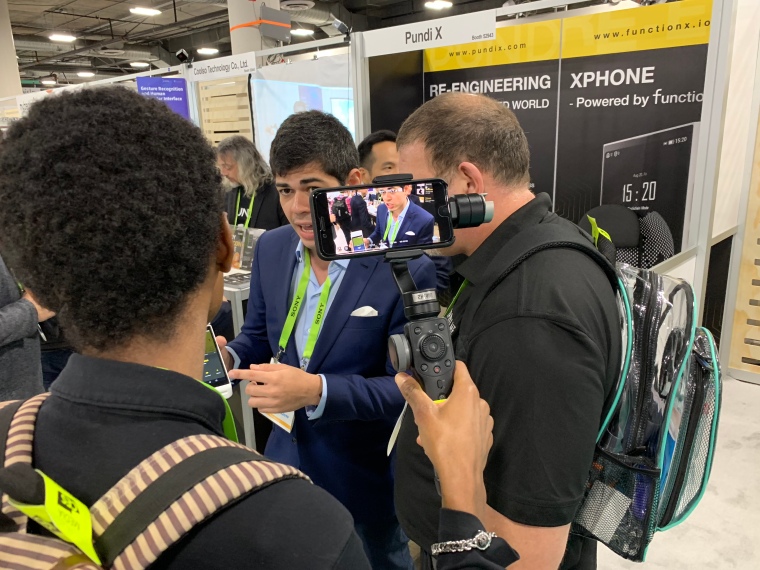 At the Pundi X booth, the XPOS and XPhone were front and center. We were overwhelmed by the interest from new potential merchants and technology enthusiasts alike. And we fielded commercial inquiries from all over the world, conducted interviews with journalists across the globe, including Korea, Japan, India, America and France.

There was strong interest in Function X and its ability to use the blockchain to transmit data of all kinds and the XPhone which employs that technology for telephony, messaging and use of decentralized application all independent of a centralized carrier.

“The XPhone is trying to show how to operate a mobile communications network without having to rely on a central switching system for addressing and routing — a truly encrypted, peer-to-peer network that liberates communicators from having to go through carriers’ centralized switching systems,” PC Magazine wrote after a visit to our booth. 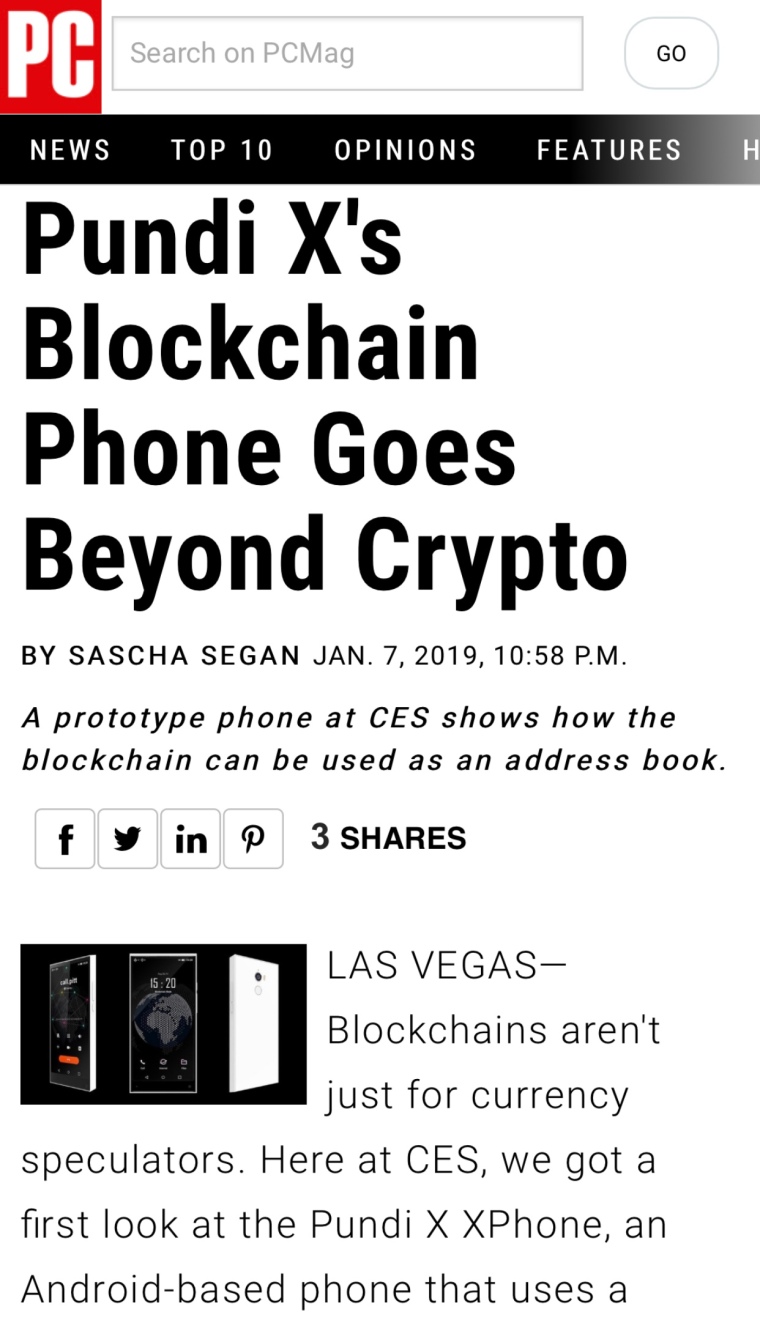 Pundi X technology has been also featured in the book ‘the Trust Technology’ written by Mark Mueller-Eberstain, which has officially launched during CES.

One of the biggest announcements from Pundi X last year was the development of the Function X blockchain, which we developed in response to increasing demand for instant, on-chain transactions for our growing global payment network.

F(x) presents exciting new opportunities for decentralizing data of all kinds but also for extending the existing Pundi X ecosystem and the use of NPXS/NPXSXEM for payments.

To build and operate the Function X ecosystem, we will launch f(x) Coin, the native independent currency that will power growth of the ecosystem.

There will be no public or private token sales or ICOs of any kind to kick off the launch of f(x) coin, but instead we announced earlier this month that a total of 65 % of tokens launched during the Token Generation Event will be set aside for holders of NPXS and NPXSXEM.

Here’s the breakdown of how they will be distributed:

There are three main ways for holders of NPXS and NPXSXEM to obtain f(x) tokens.

By simply depositing NPXS and NPXSXEM into the XWallet app you can join the distribution scheme from 10 am (GMT +8) on March 10.

We are researching “decentralized staking”, whereby users can still keep their NPXS / NPXSXEM in their hardware wallet or address they own while staking. In short users can stake from the wallets they have control over if user decides not to transfer NPXS / NPXSXEM to XWallet for staking.

Qualified NPXS/NPXSXEM holders can receive f(x) token by converting their NPXS / NPXSXEM tokens to f(x) tokens. All the converted tokens will be removed from the NPXS/NPXSXEM total supply from April/May.

All NPXS/NPXSXEM holders will be able to receive f(x) tokens with further details TBA.

We see the creation of f(x) as an opportunity to take blockchain forward but also to directly benefit holders of NPXS and NPXSXEM and the Pundi X project. The holder can choose whether they would like to participate. Here is the graph designed by Billy Dusse (Twitter: @wdulc3) to help you understand more. 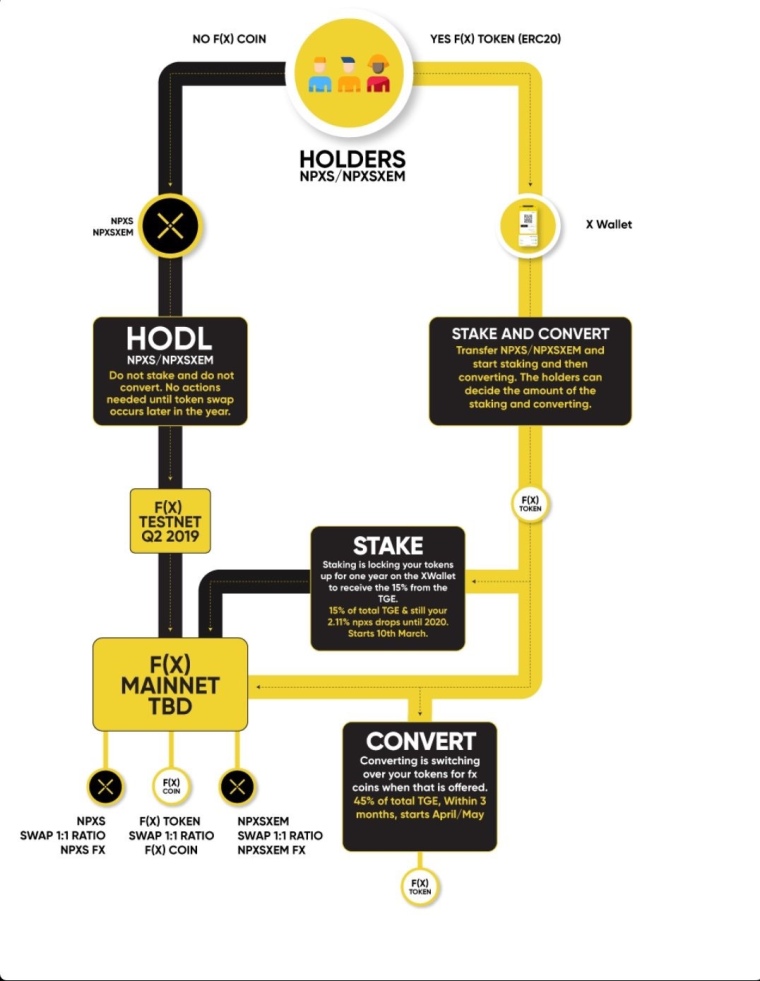 To find out more about the many benefits this development poses to holders of NPXS and NPXSXEM, or to learn more about the details of token distribution, please see our official announcement. Meanwhile our CEO, Zac, answered some of the community’s most pressing questions about the development of f(x) in an AMA earlier this month. You can find a summary of those responses here.

For token removal, we took out a total of approximately 9.7 billion tokens (5.7 billion NPXS and 4 billion tokens NPXSXEM) from the supply. It’s equivalent of 4.1 million US dollars worth of value as of January 3, 2019.

For detail of the execution, you can read the blog post here.

Mid month it was the inaugural Binance Blockchain Week, an event sponsored by the world’s leading cryptocurrency exchange to showcase the latest innovations in technology and bring together 2000 attendees and more than 70 speakers.

To celebrate, Pundi X gave away exclusively designed XPASS cards for a free top-up of 2 BNB.

Those rewards were spendable at some of our favorite participating merchants in Singapore including the Japanese fine dining restaurant Sen of Japan and Flavours of Asia right at the Marina Bay Sands complex.

To the many, many supporters — old and new — who dropped by to say hi, we say thank you!

And so ends another busy month for the Pundi X team. As ever, we’ll be working tirelessly to spread the adoption of our blockchain technology around the world and we’re excited to make some announcements in coming months about the new ways in which we’ll be doing that through 2019.

Until the next newsletter, please keep up with all our official announcements.